What You Need To Know

Wiesbaden  is a city in central western Germany and the capital of the federal state of Hesse. In January 2018, it had 289,544 inhabitants, plus approximately 19,000 United States citizens (mostly associated with the United States Army). The Wiesbaden urban area is home to approx. 560,000 people. The city, together with nearby Frankfurt am Main, Darmstadt, and Mainz, is part of the Frankfurt Rhine Main Region, a metropolitan area with a combined population of about 5.8 million people. Wiesbaden is one of the oldest spa towns in Europe. Its name translates to “meadow baths”, a reference to the hot springs. It is internationally famous for its architecture, climate (it is also called the “Nice of the North”), and hot springs. At one time, Wiesbaden boasted 26 hot springs. Fourteen of the springs are still flowing today. In 1970, the town hosted the tenth Hessentag state festival. The city is considered the tenth richest in Germany (2014) boasting 110.3% of the national average gross domestic product in 2017. The average annual buying power per citizen is €24,783.

Wiesbaden has long been famous for its thermal springs and spa. Use of the thermal springs was first documented by the Romans. The business of spring bathing became important for Wiesbaden near the end of the Middle Ages. By 1370, 16 bath houses were in operation. By 1800, the city had 2,239 inhabitants and 23 bath houses. By 1900, Wiesbaden, with a population of 86,100, hosted 126,000 visitors annually. Famous visitors to the springs included Johann Wolfgang von Goethe, Fyodor Dostoevsky, Richard Wagner, Johannes Brahms, and Henrik Pontoppidan. In those years, more millionaires were living in Wiesbaden than in any other city in Germany. Gambling followed bathing en suite, and in the 19th century, Wiesbaden was famous for both. Its casino (Spielbank) rivalled those of Bad Homburg, Baden-Baden, and Monaco. In 1872, the Prussian-dominated imperial government closed down all German gambling houses. The Wiesbaden casino was reopened in 1949.

Wiesbaden hosts a number of international companies, which have their German or European headquarters there including Abbott Laboratories, DXC Technology, Ferrari, Federal-Mogul, Melbourne IT, Norwegian Cruise Line, and SCA. Several German companies also have their headquarters in Wiesbaden, including SGL Carbon, Dyckerhoff, KION Group, DBV-Winterthur, and R + V Versicherung. Wiesbaden is also home to the “Industriepark Kalle-Albert”, an industrial park in the southern quarter of Biebrich. It is one of the largest in Germany with over 80 companies from the pharmaceutical and chemical industries, including Agfa-Gevaert, Clariant, Mitsubishi Chemical Corporation, and Shin-Etsu Chemical. The park was founded by chemical company Hoechst AG in 1997.The Federal Criminal Police Office and the Federal Statistical Office of Germany are both based in Wiesbaden, along with many Hessian ministries such as the Hessian State Criminal Police Office. At approximately €77,500, Wiesbaden has the second largest gross domestic product per inhabitant in Hesse, after Frankfurt, making it one of the richest cities in Germany. The purchasing power per inhabitant is €22,500.

Lucius D. Clay Kaserne (Formerly Wiesbaden Army Airfield or WAAF) is located adjacent to Wiesbaden-Erbenheim and is home to the US Army in Europe (USAREUR) headquarters, the 5th Signal Command and the 66th Military Intelligence Brigade. The airfield was one of the points of origin for flights to Berlin in support of Operation Vittles (the Berlin airlift) during the Soviet blockade of Berlin. General Clay, the commander of the US occupation zone in Germany, was the architect of the airlift. The United States Army runs a garrison in Wiesbaden. The facilities for US soldiers and families are spread across various locations including: Aukamn, Hainerberg, Mainz-Kastel and the Wiesbaden Army-Airfield, where the names of the streets are named after servicemen and women who sacrificed their lives during the Berlin Airlift.

German is the official language.

Wiesbaden is well connected to the German motorway (Autobahn) system. The Wiesbadener Kreuz is an Autobahn interchange east of the city where the Bundesautobahn 3 (A 3), Cologne to Würzburg, and the Bundesautobahn 66 (A 66), Rheingau to Fulda, meet. With approximately 210,000 cars daily it is one of the most heavily used interchange in Germany. The Bundesautobahn 66 (A 66) connects Wiesbaden with Frankfurt. The Bundesautobahn 643 (A 643) is mainly a commuter motorway which starts in the south of the city centre, runs through the southern part of Wiesbaden crosses the Rhine via the Schierstein Bridge and connect in the northwestern part of Mainz to the A60. The Bundesautobahn 671 (A 671) is a very short motorway in the southeastern part of Wiesbaden which primarily serves as a fast connection between the city centre and the Bundesautobahn 60 to serve the cities like Rüsselsheim, Darmstadt and the Rhine-Neckar region(Mannheim, Ludwigshafen and Heidelberg). The downtown area is bordered on the north side by Taunusstrasse, which has once featured many antique stores. The east side is constrained by Wilhelmstrasse, created by Christian Zais. This 1,000 meter-long street is named after Archduke Wilhelm, not Emperor Wilhelm II, as many mistakenly believe. The streets of central Wiesbaden are regularly congested with cars during rush hour. Besides some areas, especially the Ringroad and not directly in the centre, and the southern arterial roads like the Mainzer Straße, Biebricher Allee and Schiersteiner Straße.

Wiesbaden main station, built between 1904 and 1906. Wiesbaden’s main railway station and several minor railway stops connect the town with Frankfurt, Darmstadt, Mainz, Limburg, and Koblenzvia Rüdesheim. Wiesbaden Hauptbahnhof is connected to the Cologne-Frankfurt high-speed rail line by a 13-kilometer branch line. Hamburg, München, Leipzig, Dresden, Stuttgart, Mannheim, and Hanover are connected directly to Wiesbaden via long distance service of the Deutsche Bahn. More services to locations outside the immediate area connect through Mainz or Frankfurt Airport or Frankfurt Hauptbahnhof. Regional trains and bus services are coordinated by the Rhein-Main-Verkehrsverbund.

A Bus at Schierstein harbor

Wiesbaden is connected to the Frankfurt S-Bahn network and served by three lines (S1, S8 and S9) which connect Wiesbaden with the densely populated Rhine Main Region. All routes have an at least 30 minute service during the day, in the rush hour partially every 15 minutes schedule. It provides access to nearby cities such as Mainz, Rüsselsheim, Frankfurt, Hanau, and Offenbach am Main, and smaller towns that are on the way. 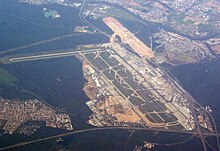 The city can easily be accessed from around the world via Frankfurt Airport (Flughafen Frankfurt am Main) which is located 15 kilometres (9.3 miles) east of Wiesbaden. The airport has four runways and serves 265 non-stop destinations. Run by transport company Fraport it ranks among the world’s 10 busiest airports by passenger traffic and is the second busiest airport by cargo traffic in Europe. The airport also serves as a hub for Condor and as the main hub for German flag carrier Lufthansa. Depending on whether total passengers or flights are used, it ranks second or third busiest in Europe alongside London Heathrow Airport and Paris Charles de Gaulle Airport. Passenger traffic at Frankfurt Airport in 2011 was 56.5 million. The airport can be reached by car or train and has two railway stations, one for regional and one for long-distance traffic. The S-Bahn lines S8 and S9 (direction Offenbach Ost or Hanau Hbf) departing at the regional train station take 30 minutes from the airport to Wiesbaden Central Station, the ICE trains departing at the long-distance railway station take also 30 minutes to the central station.

Despite the name, Frankfurt Hahn Airport (Flughafen Frankfurt-Hahn) is not located anywhere near Frankfurt but is instead situated approximately 100 km (62 mi) from the city in Lautzenhausen (Rhineland-Palatinate). Hahn Airport is a major base for low-cost carrier Ryanair. This airport can be reached by car or bus. The nearest train station is in Traben-Trarbach, it is ca. 17 km (11 mi) from the airport, on foot. The roads are not lit.

There are small container port operations nearby on the rivers Rhine and Main.